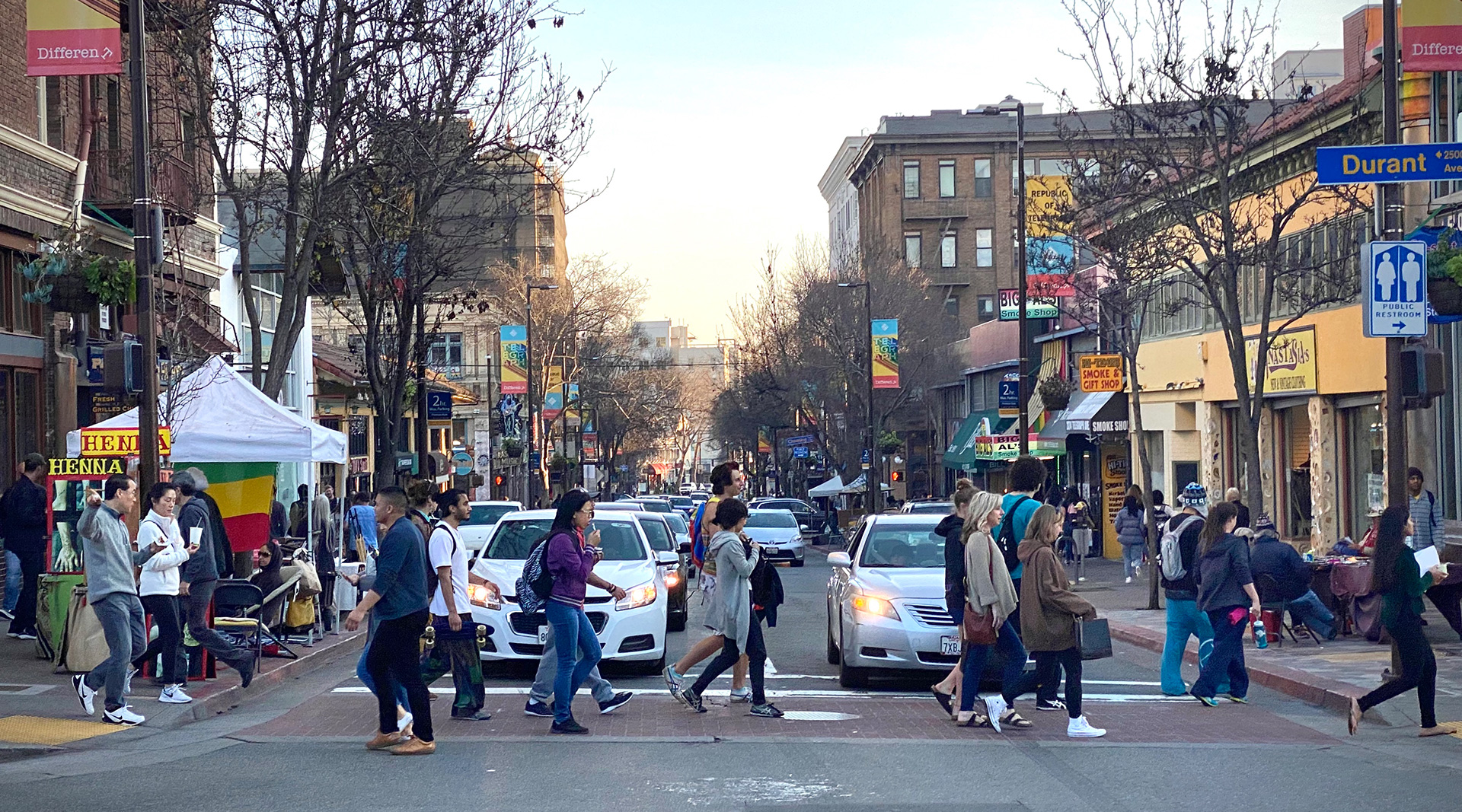 The bustling intersection at Durant and Telegraph Avenues

Berkeley, California holds worldwide renown for two things—being home to the University of California, Berkeley, and serving as the hotbed of 1960s counterculture—and it’s on Telegraph Avenue in Berkeley that you’ll find the epicenter of both.

Named after a 1800s telegraph line on which the street was built, this thoroughfare, which connects Berkeley to its neighboring city of Oakland, runs more than four miles long from downtown Oakland to the University of California. Amongst locals, the term “Telegraph” usually refers to a four-block strip of the avenue in the Southside neighborhood that borders the campus. Walk south on the stretch of Telegraph from Bancroft on the edge of campus to Dwight Way, and you’ll find street vendors, vinyl stores, smoke shops, bookstores, and close to 100 restaurants—all just steps from the top-ranked public university in the world. And while it’s the nerve center of student life off campus, it’s also a historic site that has come to represent a legacy of activism and social change.

Berkeley may have been a historically conservative town. But in 1964, just steps from Telegraph near the south entrance to UC Berkeley, the first student protest took place, which launched the Free Speech Movement that fought for students’ rights to speak out against institutions. This set the tone for Berkeley, and Telegraph, in particular, to become the setting for various opposition movements to come, including the Black Power movement and the Anti-Vietnam War Movement. From the 1960s onward, it was the site of countless demonstrations, thus beginning an era of activism that lasted for decades. During the most heated political activity, stores on Telegraph became havens for activists, with shopkeepers shielding activists from teargas during protests.
‍

Even in the absence of sit-ins, Telegraph Avenue was known as a place where people could share new ideas about everything from the practice of yoga to communal living. In 1967 during the Summer of Love, Telegraph was the East Bay’s version of Haight Street, flooded with droves of hippies of all races and ages. Steve Wasserman, the publisher of Berkeley-based Heyday Books, recalled what the culture of the area was like in the 1960s. “Walking down Telegraph was like walking into a modern Renaissance information piazza, surrounded on all sides by great delights,” he said.

In the early 1970s, Telegraph became one of the first streets in North America to be made completely wheelchair accessible, and around the same time—decades before Craiglist—a student-run record store, Leopold’s, invented the first-ever computer-powered public computerized bulletin.

Telegraph also boasted a thriving street vending scene. Though commonplace now, when it first began in the early ’70s, open-air shopping was a radical concept that gave the free-spirited a way to support their unconventional lifestyles by selling handmade goods directly to customers. Nearly half a century later, the street market is still standing, with some of the prominent artists from 40 years ago still selling their wares at the same stalls today.

While you probably won’t spot Joan Baez or the streakers who took over Telegraph during the summer of ‘76, you’ll still find a mix of graduate scholars, gutter punks, Cal Bears football fans and panhandlers—and, if you pay close enough attention, an undercurrent of social consciousness that has never gone away.

The restaurant highlighted in the story. Order delivery or grab pick-up from this amazing spot.
Sliver Pizzeria

Downtown Oakland is a Celebration of Its Immigrant Heritage
By
Susannah Chen
Head 10 miles east of downtown San Francisco, and you’ll find the epicenter of another bustling Bay Area metropolis: the downtown district of Oakland.

Souper Bowl Winners in East Bay
By
James Lee
Every New Year is a perfect opportunity to leave behind the over-indulgent dinners, happy hours, and way too many “cheat days.” But let’s be real - eating healthy can be tough and menu planning can be even tougher. It takes some serious mental fortitude! Enter: soups!