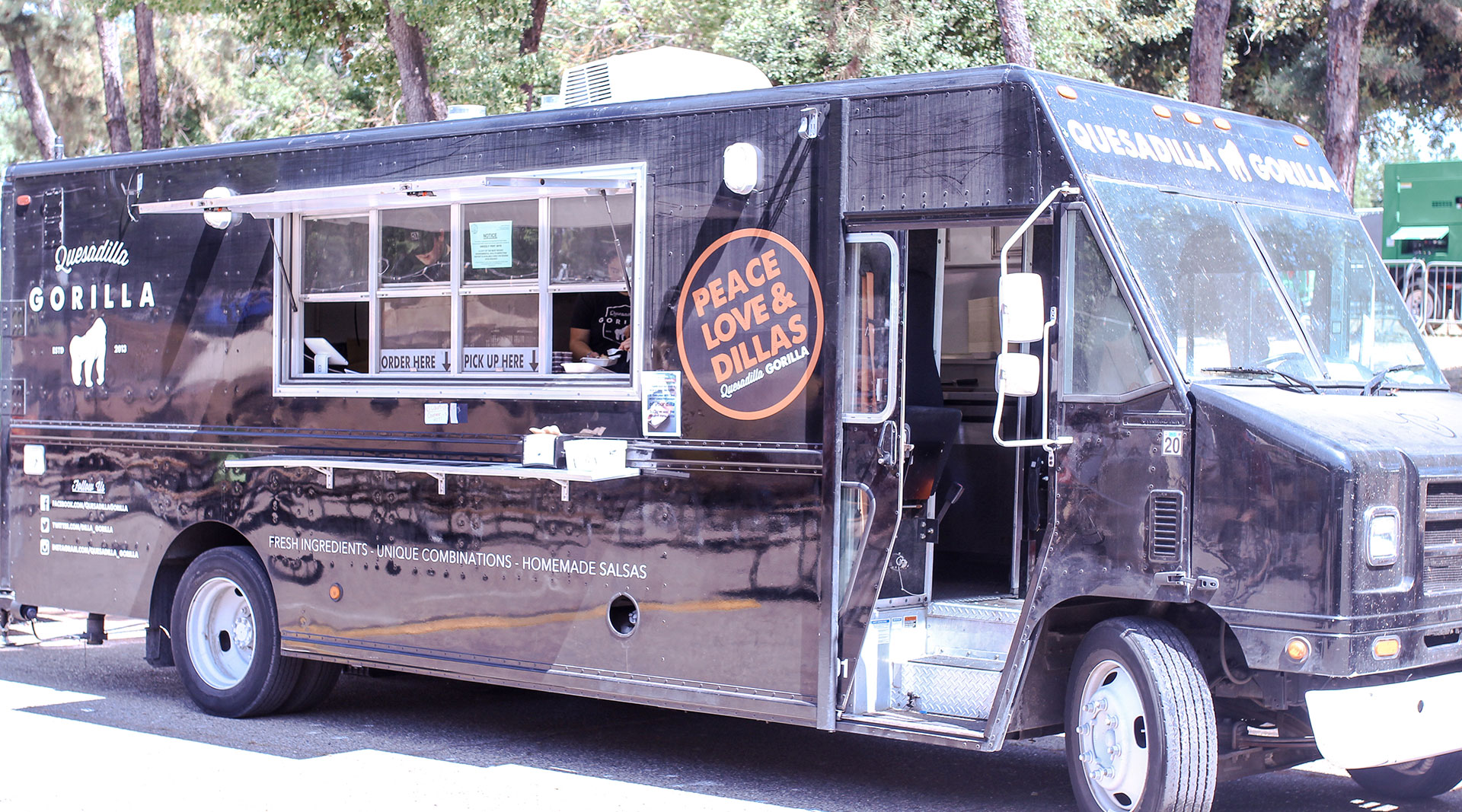 Warning: This story is gonna get cheesy.

And not just because it starts with a kitchen courtship between two teenagers in the small California town of Visalia. Nor is it because it ends with a business so successful that the pair placed third on Fortune Magazine’s 2019 list of Top 100 Fastest Growing Inner City Businesses in the Country. Not even because the community rallied around the enterprise when the coronavirus pandemic threatened to close their doors for good.

Sure, the tale of Miguel and Mikayla Reyes—now married with a 2-year-old daughter—amassing national recognition and weathering a storm with the help of loyal customers undeniably pulls at the heartstrings. But this story truly abounds in literal cheese because the duo deal strictly in quesadillas all day, every day at Quesadilla Gorilla, a fast casual mini-chain in the Central Valley that includes brick-and-mortar locations in Fresno and Visalia as well as a food truck.

“We were going to open late night, maybe do wings and pizza. Then one night as I was falling asleep, the idea came out of nowhere: ‘What about quesadillas? They hit the spot every time,’” recalled Miguel, who preferred helping his mom cook to playing video games as a kid. “I thought we could do a build-your-own menu and different specials. As the lead at a wood-fired pizza shop, I was used to working with flour, cheese, and toppings, but everyone was doing that on pizza. I think we were the first ones to do this concept.”

But they didn’t want a typical Mexican menu. “We didn't want to have to put our focus into fifteen plates,” Mikayla added. “If we could put all that focus into one item and make it really good, that would set us apart from all the other spots downtown. And it did.”

When it was time to develop the menu, they knew where they wanted to start: the family recipe box. But most recipes weren’t written down; they were tightly guarded, memorized secrets passed down through generations. Take the chile verde, for example: It was from Mikayla’s great-grandmother, who’d brought the family to the States from Mexico.

“She’d only told my aunt Hattie [the recipe], so it stayed very close-knit. But I loved that chile verde, so I asked: ‘What do you need from us to give us this recipe?’” Mikayla remembered. “Their only stipulation was that we get married. We’d only been dating for two months, but sure, yeah. No pressure.”

Once they’d agreed to eventually make it official (which, for the record, Miguel had told Mikayla was his intention within a month of meeting her), the hard work began. “I’d have to weigh stuff out and adapt the recipes,” he recalled, offering an example: “Aunt Hattie’s an amazing cook who just does her thing by feel, [but for the restaurant] I had to make this times 10 or 20 every day.”

The next roadblock was deciding what to call the enterprise. In fact, they delayed opening for an entire month just because they hadn’t decided on a proper name. “We had Gourmet Qs, The Melt—all really dumb names that didn’t stick out,” Miguel recalled.

“I was getting a haircut and telling my barber about how we didn’t have a name. He immediately was like, ‘Quesadilla Gorilla.’ I was like, ‘That’s not a good name. It doesn’t make sense.’  He explained that he goes to this one bar in LA every time because he remembers the name. [Quesadilla Gorilla’s] so far out there people will remember it. It rhymes if you say it the [Anglicized] way. By the time my haircut was done, it made sense.”

Even with a cool name and a unique concept, the restaurant, which opened in 2013, got off to a rough start. (“Everyone thought we sold only cheese quesadillas,” Miguel recalled. “It was slow. Selling 30 used to be a good day.”) Then an article came out in The Fresno Bee, and overnight, business tripled.

For Mikayla, who’d always loved the romantic notion of mom-and-pop restaurant ownership but didn’t know if the reality could live up to the ideal, QG has evolved into a dream realized as the restaurant has expanded: “I love serving people. I love the atmosphere and being a part of the community.”

Ultimately, it’s been QG’s fervent fan base that has seen them through tough times, like when an expansion miscalculation left them with a loan on a closed location in 2018, or most recently, when the COVID-19 crisis hit.

“Like any other business, it was, ‘We’re done.’ We couldn’t pay the loan, payroll, rent. I couldn’t see any way out of it,” Miguel recalled. The two had to come around to asking customers, their church, and local business owners for a hand. “It was hard to be vulnerable to our customers and say we need help.”

But the community came around, and Quesadilla Gorilla had its two best weeks of sales ever, thanks to lots of people chipping in to buy meals for local hospital workers and lower-income families in need. Miguel and Mikayla finally got federal COVID-19 relief funding, which allowed them to reopen their Fresno location.

“We’re realizing we are now operating more efficiently and are positioned really well [because] we aren’t a sit-down with bartenders and servers. We can crank out orders with two people if necessary. We partnered with DoorDash and can deliver. That’s helped.”

The response has put the thrilla back in Gorilla: Mikayla and Miguel are planning more QG outposts, picking up business bibles, and generally trying to find the silver lining in scary times. “This is the time to support the community and rally together. It was incredible how quickly all of these local businesses joined together [to figure out] how we can keep each other afloat,” Mikayla said.

“It feels so right that we started in our hometown. There’s something magical about the Central Valley, knowing everybody, and being in the restaurant industry right now. The outbreak is reminding me how isolated we can get and how much we need community and that this is where my heart has always been, to serve and nourish people, and to give people a little taste of human interaction when we can’t have any.”

If you’re thinking of ordering, consider these thoughts on the menu from Miguel and Mikayla:

Cilantro lime chicken, crisp bacon, jalapeños, and a white cheese blend fill the quesadilla named after the barber who came up with the eatery’s name. “We wanted to honor his contribution, and it’s always our biggest seller,” Mikayla said. Adds Miguel: “Now he’s like, ‘Man, I should have got a penny for every one of those you sold.’”

All seven dips are made in house and come two to each order. “My favorites are Liquid Gold and Cilantro Cream, the secret sauce that goes in every ‘dilla,” Miguel said, admitting, “It would be tough if I had to pick between Cilantro Cream or Mikayla.”

Quesadilla Gorilla offers Soyrizo and vegan cheese for non-carnivores, as well as gluten-free corn tortillas with an option to specify whether the selection is an allergy or a preference.

“These were originally put on the menu for kids, but it turns out more adults order them,” Miguel said. “We also do specials, like the Robert Brownie Jr., which is Nutella, brownies, and salted caramel.”

The restaurant highlighted in the story. Order delivery or grab pick-up from this amazing spot.
Quesadilla Gorilla 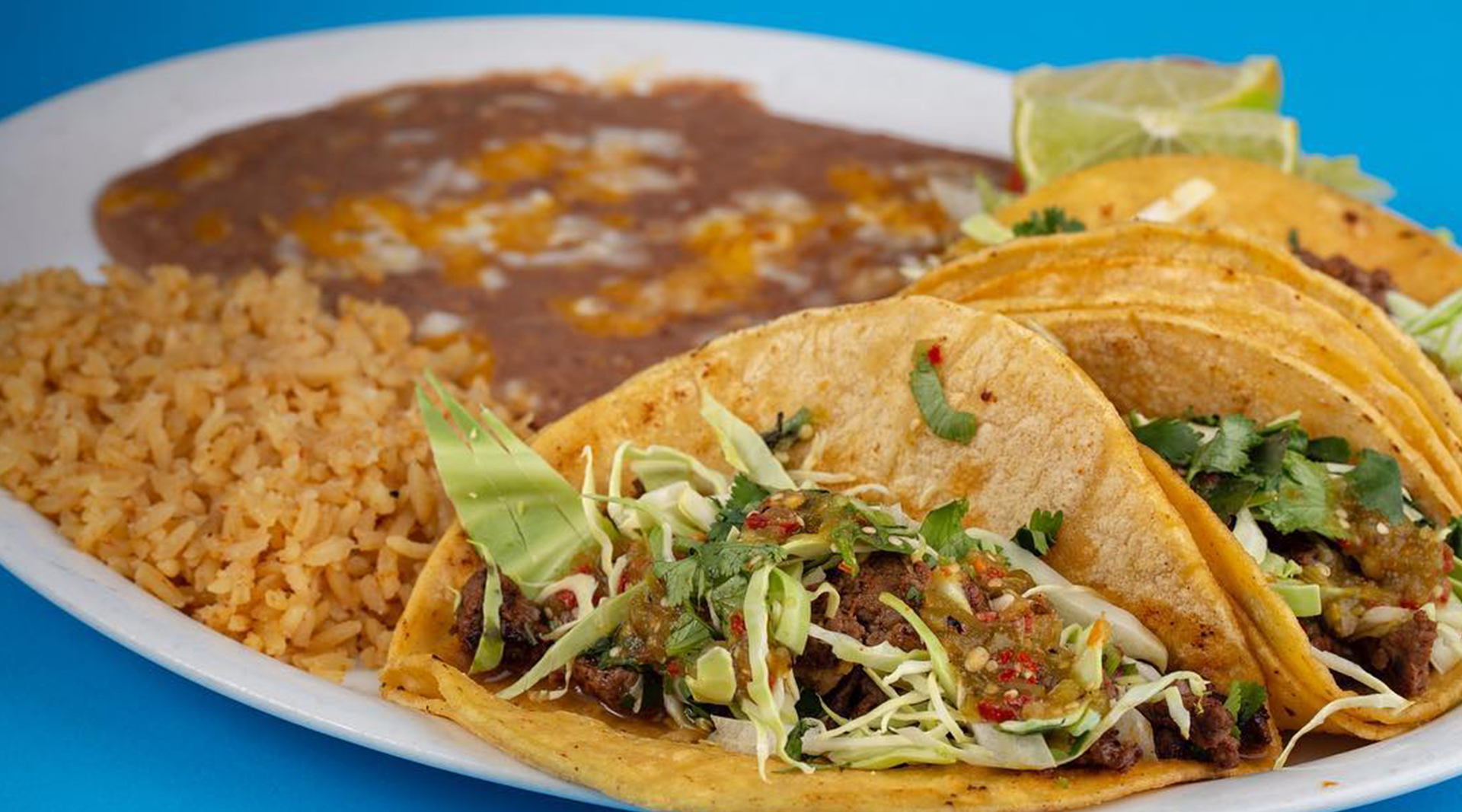 Fresno’s Taco Highlights
By
Carrie Bell
Make every day taco Tuesday by ordering from these restaurants and food trucks whose shell game is strong whether you prefer that shell to be soft or crunchy, hot or cold, flour or corn.