Just like American cooking wouldn’t be the same without hamburgers, or Mexican would be a different cuisine without tacos, Vietnamese food wouldn’t be what it is today without pho. Pho—a clear soup with rice noodles, beef or chicken, herbs, and a bone stock broth—is a daily staple in Vietnam. (The same word, pronounced “fuh,” can also refer to the rice noodles that are used in the dish.) And like so many of the world’s greatest gustatory pleasures, pho has been refined and perfected over a long period of time—more than a century, in fact.

While historical details are hotly debated, most agree that pho originated around the beginning of the twentieth century just southeast of the northern city of Hanoi. Thanks to the appetite of the French, who had recently colonized Vietnam, the country was suddenly consuming a lot of beef, and immigrant Chinese laborers began purchasing inexpensive beef bones to make soup that reminded them of their home states of Guangdong and Yunnan.

In 1954, communism took over Vietnam, and the country split into two parts. More than a million people fled the northern state for its southern counterpart, bringing the popularity of pho with them. The Southern Vietnamese loved the dish, but tweaked it to their tastes; Northern- and southern-style pho quickly became distinct from one another.

Both versions begin by simmering bones for hours with charred aromatics such as onions, plus spices such as star anise, cinnamon, coriander, and fennel. But in Hanoi and northern Vietnam in general, pho stock can be made with either chicken or beef bones, and the emphasis is the savory elements of scallion and black pepper. Many restaurants offer either beef or chicken meat and wide, flat rice noodles. And while you might get a few scallions and chiles for garnish, the true focus is on a simple, clean-tasting, savory broth.

Vietnam’s more fertile south is home to a heartier noodle soup. In cities like Saigon, stock begins with beef and oxtail bones, along with the addition of rock sugar for sweetness. Almost all pho is based on beef cuts, which come in a wide variety, from thinly sliced rare flank steak to fatty brisket to meatballs and can include offal pieces like tendon, tripe, and bone marrow. Rice noodles are typically thin, and thanks in part to the region’s agricultural focus, herb garnishes are a big part of the pho experience. With any pho order, expect an array of condiments and fresh vegetables for adornment: think hoisin or bean sauce, chili sauce, lime wedges, mung bean sprouts, cinnamon basil, sawtooth coriander, and mint.

While this classic Vietnamese noodle soup can be found across the country today, pho didn’t grace America until after the end of the Vietnam War. Between the mid-1970s and mid-1990s, roughly 2 million Vietnamese settled in the States, many of them landing in parts of the country like California, Texas, and Louisiana. As relations between America and Vietnam improved, pho entered mainstream culture, so much so that in 2014, the word “pho” was officially added to Merriam-Webster’s Collegiate Dictionary.
‍

How to Order Pho: A Primer

If you’re at a specialty pho restaurant, you’ll order pho by the cut of meat that you want, such as flank steak, brisket, or round, since the accompanying noodles, broth, and garnishes will be the same. (When ordering takeout or delivery, request the soup and noodles be packaged separately for freshness.)

When your bowl arrives, taste the broth first before adding any condiments. The soup should be clear, not cloudy, and the broth flavorful and fragrant yet not too salty or sweet. Should you find yourself needing to douse the soup with seasonings, then it’s a sign the broth is too bland. If you’ve ordered rare slices of beef, such as flank, submerge them briefly in the piping-hot broth to cook them slightly to your preferred doneness. (Personally, I like to eat them right away before they overcook, dipping the pink slices in a dab of chili sauce for kick.) Pluck any herb leaves from their woody stems and stir them into the soup along with bean sprouts, if you have them. Squeeze a wedge of lime or lemon over the top. Aim to get a little bit of everything—a few greens, some acid, a slice of meat, noodles, and a sprout for crunch—in every bite.

If you’re looking to expand your pho horizons, spring for a lesser-known beef cut (rich beef meatballs and unctuous slices of tendon are my favorite). Or slurp pho as the Vietnamese do: first thing in the morning as a nourishing breakfast.

The city’s best-known spot for chicken pho is located on the stretch of Larkin Street known as San Francisco’s “Little Saigon.”

You can find Hanoi-style pho at this Vietnamese mainstay where Julia Child liked to eat.

This unassuming shop is our personal favorite for the cleanest, most flavorful Northern-style pho broth.

With both pho ga (chicken pho) as well as plenty of Saigon-style bowls, you don’t have to choose a style here.

The name says it all at this eatery, where you’ll get a platter of fresh herbs and hoisin and Sriracha to round out the experience.

The restaurant highlighted in the story. Order delivery or grab pick-up from this amazing spot.
Turtle Tower Pho

Chicken Rice — America’s New Comfort Food
By
Susannah Chen
“Somewhere in the world, a chicken is simmering. Nearby is a bag of rice. The mixture of the two is comfort food in every climate,” David Tanis once declared. Whether it’s referred to as arroz caldo, khao mun gai, or something else, the notion of chicken and rice as the consummate meal is universal... 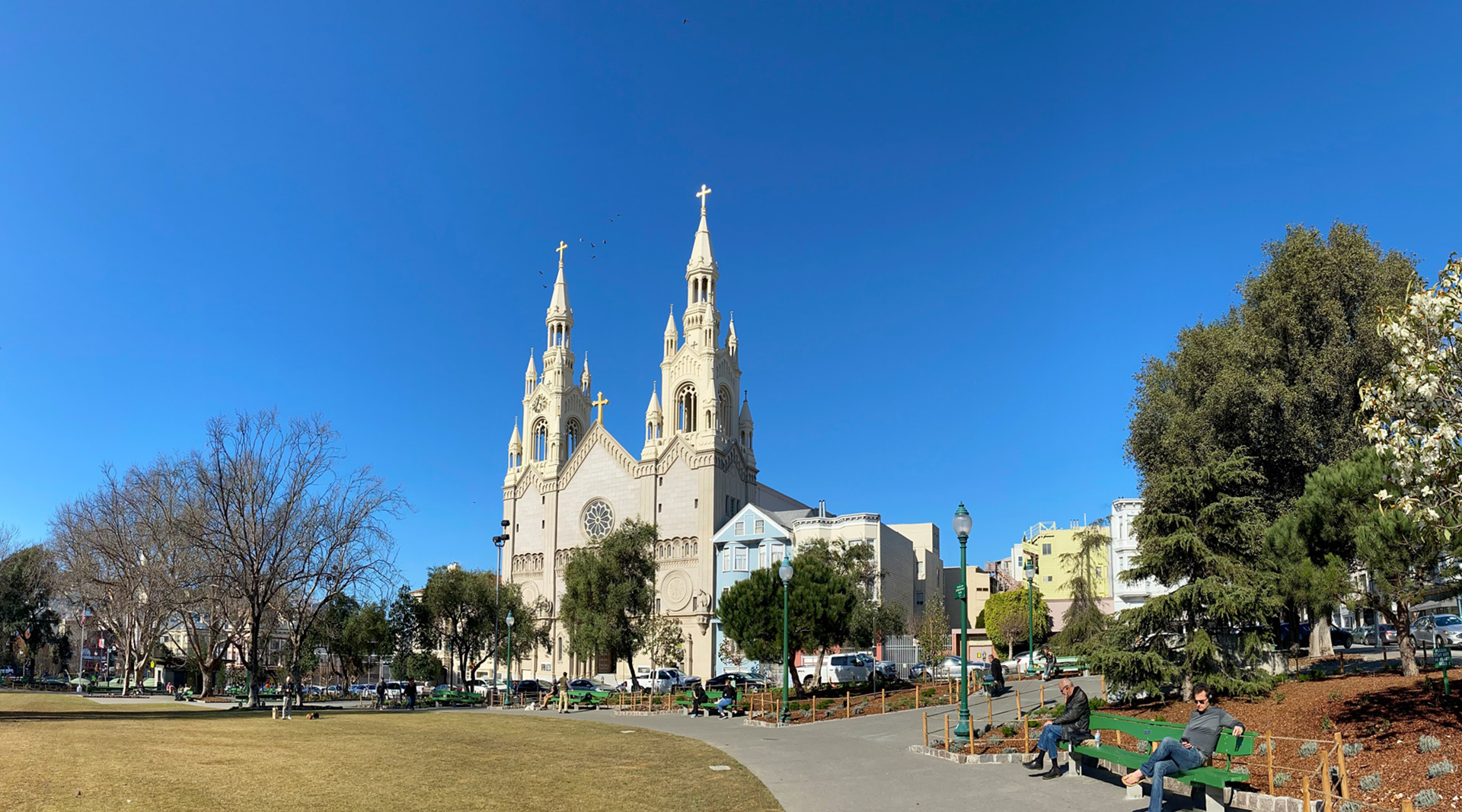 North Beach, One Slice at a Time
By
Brian Button
Take a waltz through North Beach, and you may notice a few things: alleyways named after famed Beatniks. An entire avenue lit up by risqué neon signs. Street lamps displaying green, white, and red stripes. Young urban professionals and families (along with plenty of tourists) occupying sidewalk cafes and ristorantes.