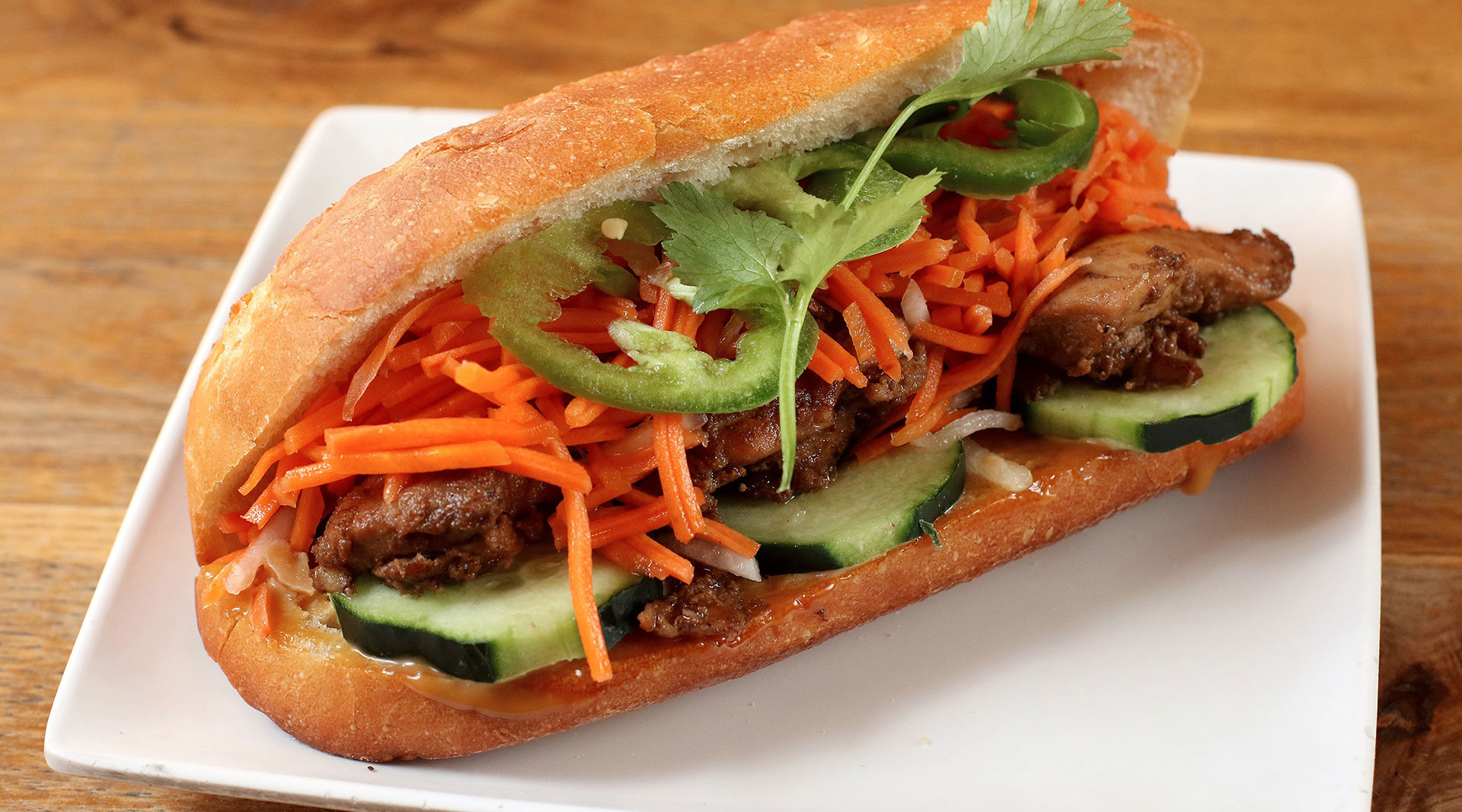 Whether it’s the classic PB&J or the savory cheeseburger, the sandwich is a lunchtime staple that can be found in any American school cafeteria. As a child of Vietnamese refugees, I grew up with a different kind of sandwich from many of my schoolmates, a sandwich that has made a name for itself as an iconic Vietnamese food: the bánh mì.

“Bánh mì” taken alone means “bread,” but it also refers to the French baguette that is the foundation of the dish and therefore has become the reference to the sandwich. A typical bánh mì (pronounced “BAH-N mee") has Vietnamese meat and vegetable fillings like chả lụa (pork sausage), cilantro, cucumber, and pickled carrots and daikon, sandwiched between French ingredients, like a wheat baguette and a spread of pâté, mayonnaise, or some chili. The magic ingredient that gives the sandwich its umami flavor is a few drops of Maggi sauce (also introduced by the French). The ultimate example of organic fusion between Western and Eastern cultures, the bánh mì is not just Vietnam’s version of something French, but a symbol that embodies Vietnam's history and philosophy.

Many believe the etymology of the name stems from the  french term “pain de mie” which translates to “soft white bread.” During the French colonial period, the crispy baguette was introduced to Vietnamese people. At that time, it was referred to as “bánh tây” or “western bread,” and used to make a sandwich exclusive to the wealthy because it was filled with expensive cuts of meat. After the French defeat, Vietnamese sandwich-makers adapted bánh tây to have a more food therapy-focused philosophy of yin-yang (“balanced”) diet, with warming meats and bread contrasted by cooling pickled vegetables, jalapenos, and cilantro, resulting in a sandwich that was refreshing, clean, and never too heavy.

Travel to Vietnam, and these days you can buy bánh mì from any number of street vendors and convenience stores. It can be as dense or as light with fillings as you’d like: Some vendors sell just the baguette with a spread of pâté, while others have multiple variations, one of the most popular is bánh mì đặc biệt (special combo sandwich) which is has an assortment of cuts and veggies.

After the Vietnam War ended roughly 45 years ago, refugees from Saigon (what is now Ho Chi Minh City) began bringing this dish overseas and sharing it with the rest of the world. Today countless cities and towns across North America have their own bánh mì shops or chains. You can find bánh mì south of the border in Mexico, across the Atlantic in cities like London and Paris, and in cities throughout Asia. Yum Brands, the owner of fast food restaurants Taco Bell, KFC, and Pizza Hut, has even tried its hand at selling the popular street food. Most bánh mì shops in the U.S. will have at least 10 different varieties to choose from, so you’re never short of something different to try.

If you’re hoping to pick up some bánh mì in SF, check these places out:

An Chi sells a BBQ pork bánh mì, and if you’re feeling extra hungry, add a side of deep-fried imperial rolls (cha gio).

For a limited time during the current health crisis, get Pho Dong Huong’s Grilled Pork bánh mì for just $5 each (“Grilleds Pork Sandwiches”). It’s a great opportunity to support the business.

It may not be your traditional bánh mì, but Co Nam makes a trendy version of the Vietnamese sandwich with FRIED Chinese steamed buns. Adding this to my cart now…

If you’re hoping to pick up some bánh mì in East Bay, check these places out:

Pick between beef, chicken, pork, or tofu bánh mì, and make sure to get a Vietnamese iced coffee, too.

Only in the Bay Area could you find both traditional bánh mì as well as unique ones with distinctly California fillings like the Telegraph Cheese bánh mì, with a creamy layer of Gina Marie cream cheese.

Get the bulgogi bánh mì for a Korean twist on the Vietnamese sandwich.

If you’re in Alameda, Dragon Rouge serves a Vietnamese-style take on a French dip that combines two popular Vietnamese dishes, bánh mì and cà ri (curry). It’s a bánh mì filled with curry stir-fry with a side of yellow curry bisque for dipping.

If you’re hoping to pick up some bánh mì in South Bay, check these places out:

One of my favorite spots when I first moved to the West Coast, this Bay Area native bánh mì chain has over 10 different sandwich styles to choose from, like a Chinese-style BBQ Pork version.

Order one of three different kinds of bánh mì, like the grilled pork featured here, and add a side of gỏi cuốn (fresh spring rolls).

Pick up Pho Wagon’s Bánh Mì, Chips & Drink combo for lunch—it includes a side of chips and your choice of soda, unsweetened iced tea, or Thai iced tea.

With more than 26 different bánh mì to choose from, you can’t go wrong.

Go for the Special Combo Bánh Mì if you’re feeling extra hungry, or grab the Avocado Veggie if you’re not feeling meat today.

If you’re hoping to pick up some bánh mì in the Peninsula, check these places out:

A cornerstone in the South San Francisco community, Little Saigon has a variety of Banh Mi to choose from, including beef, pork, chicken, tofu and veggie, and spicy catfish.

Featured on the popular culinary site "Serious Eats", Pho to Chau offers the ability to add a fried egg to your banh mi of choice.

If the story behind bánh mì has gotten you hooked to Vietnamese cuisine, read more about the dish that first put Vietnam on the culinary map of the world, pho.

The list of restaurants highlighted in the story. Order delivery or grab pick-up from any of the places near you.
Bun Mee 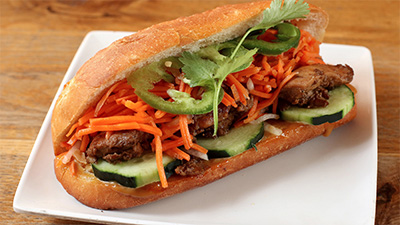 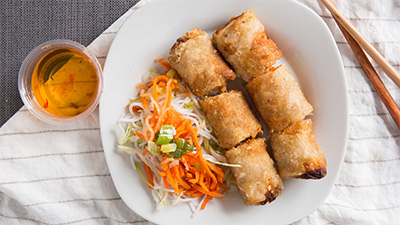 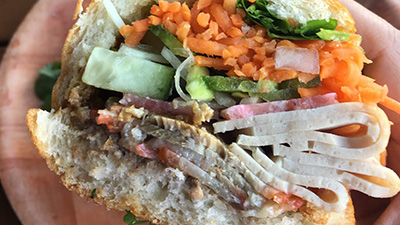 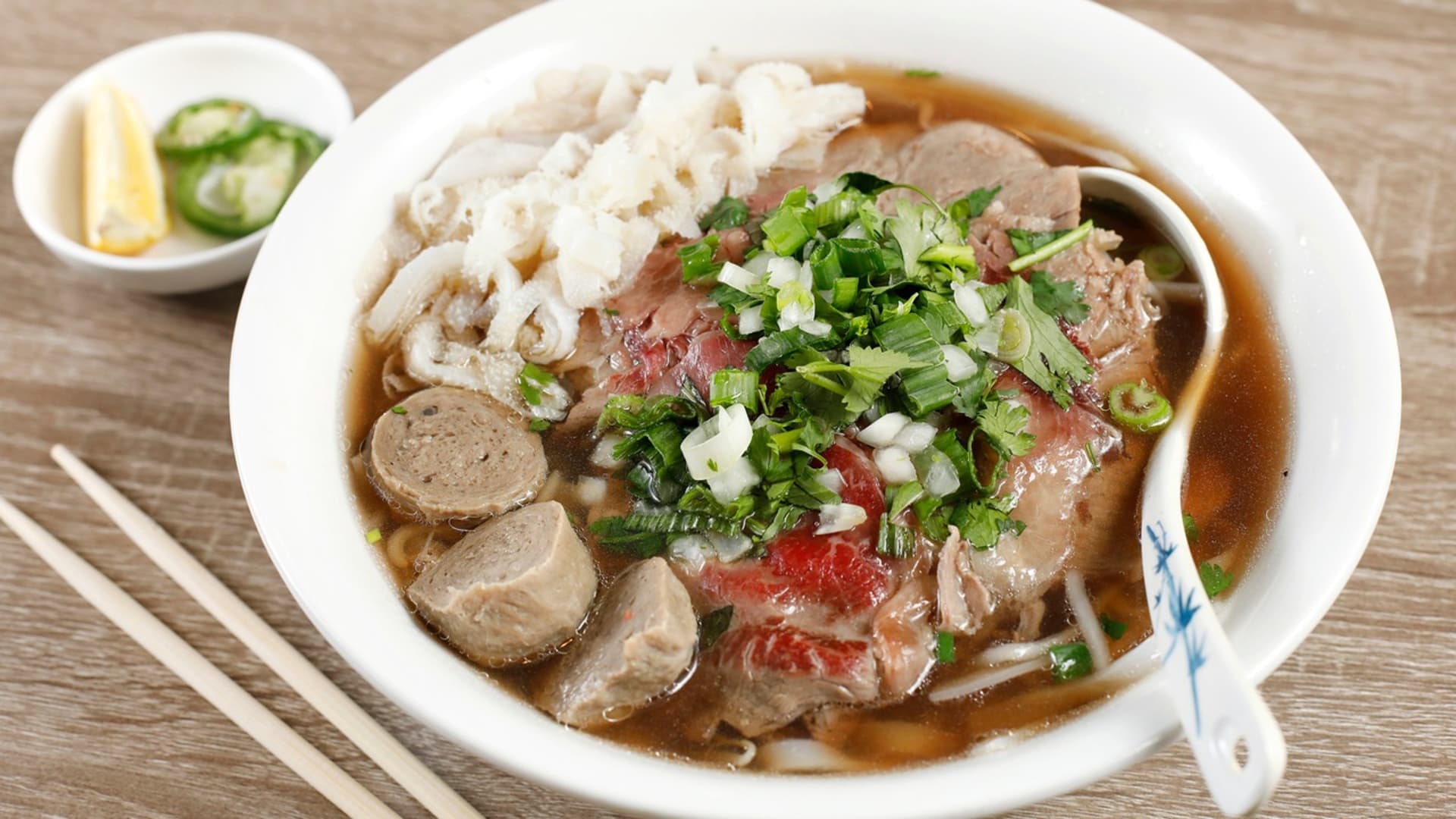 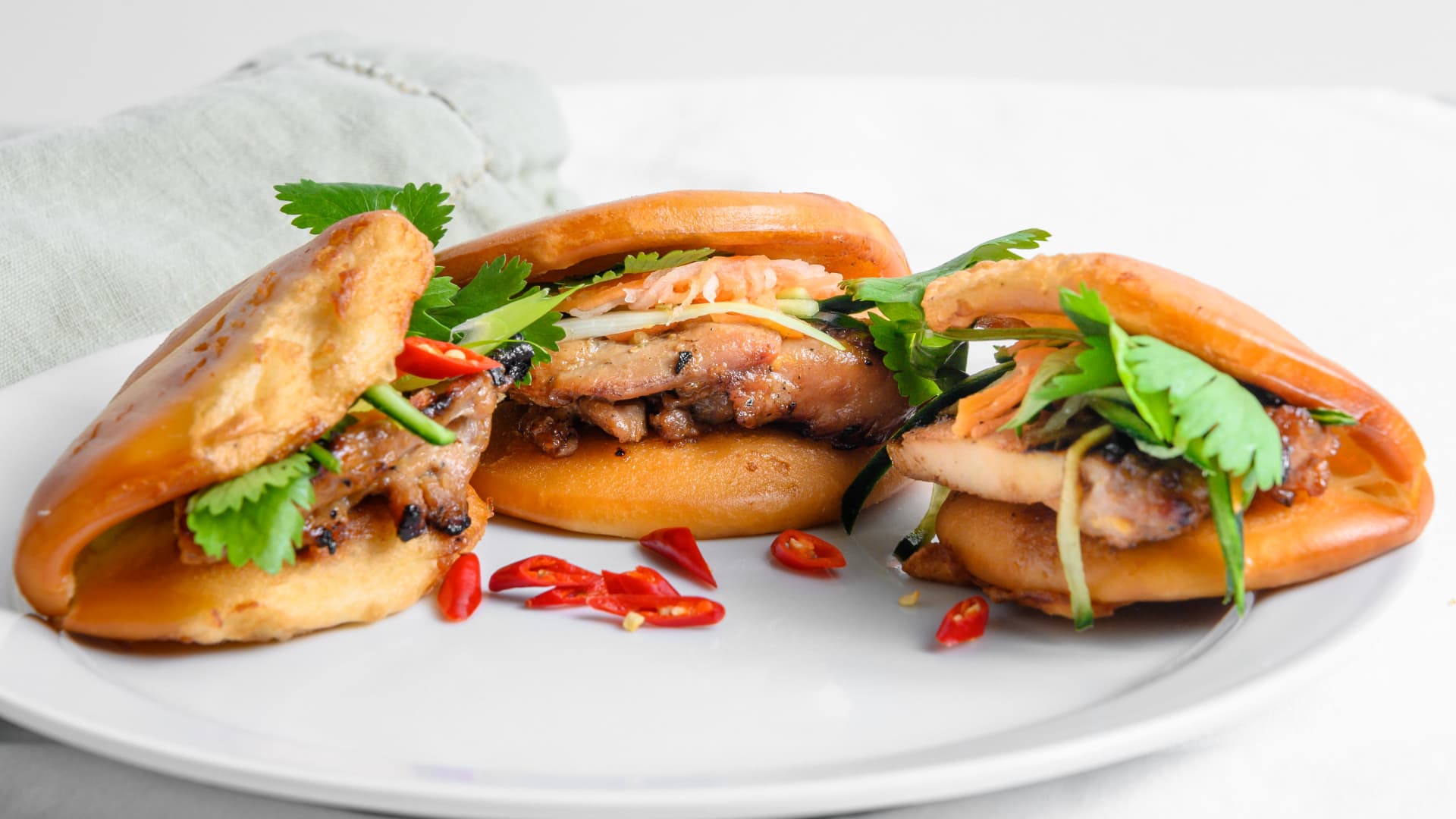 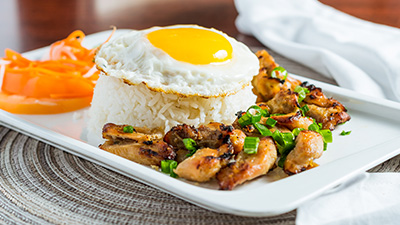 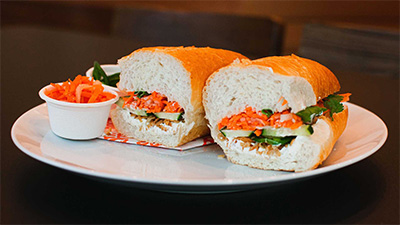 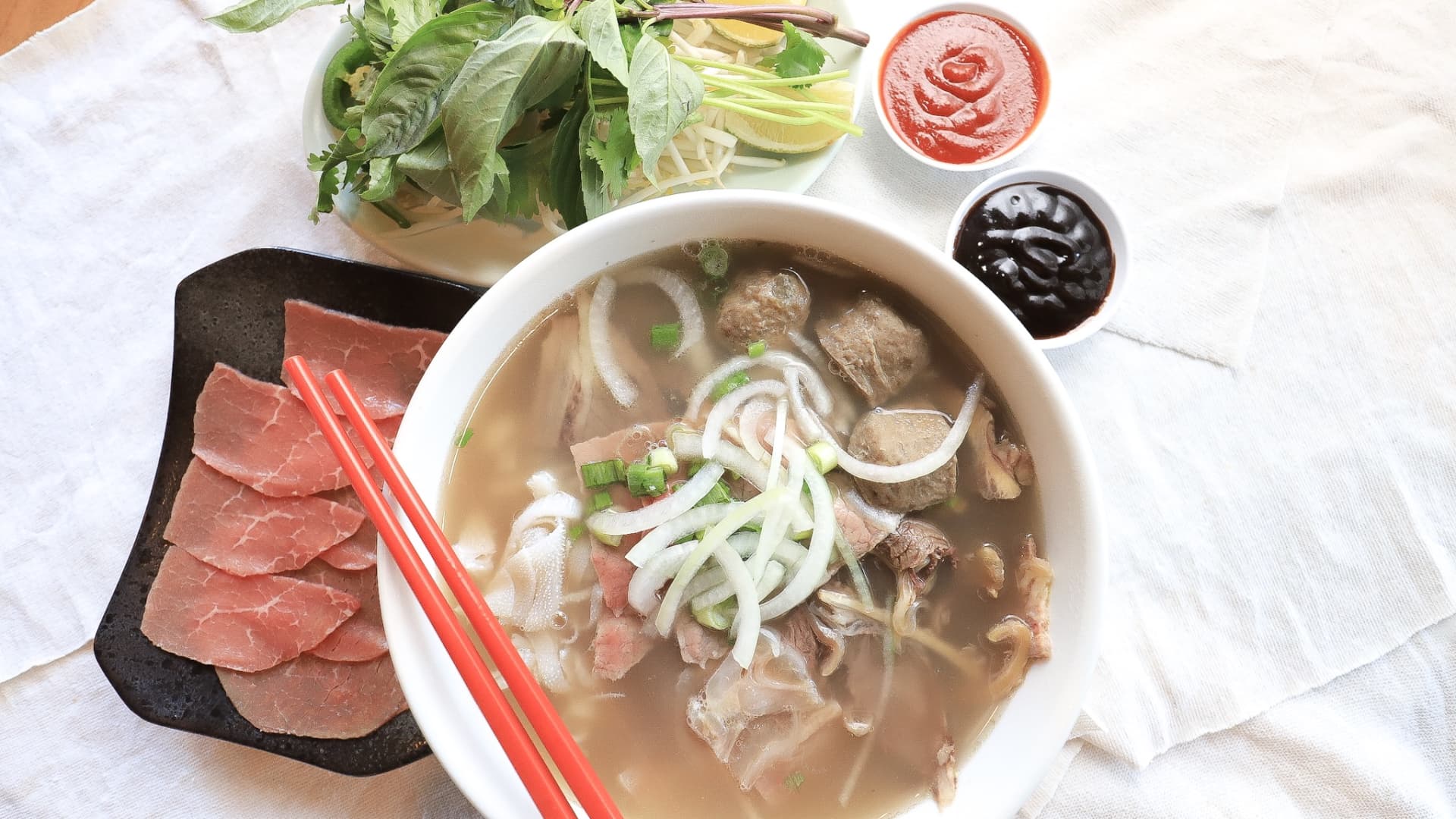 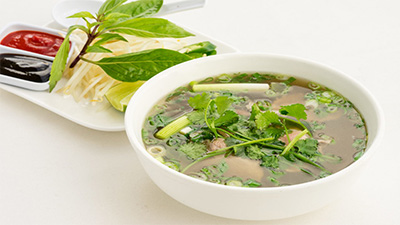 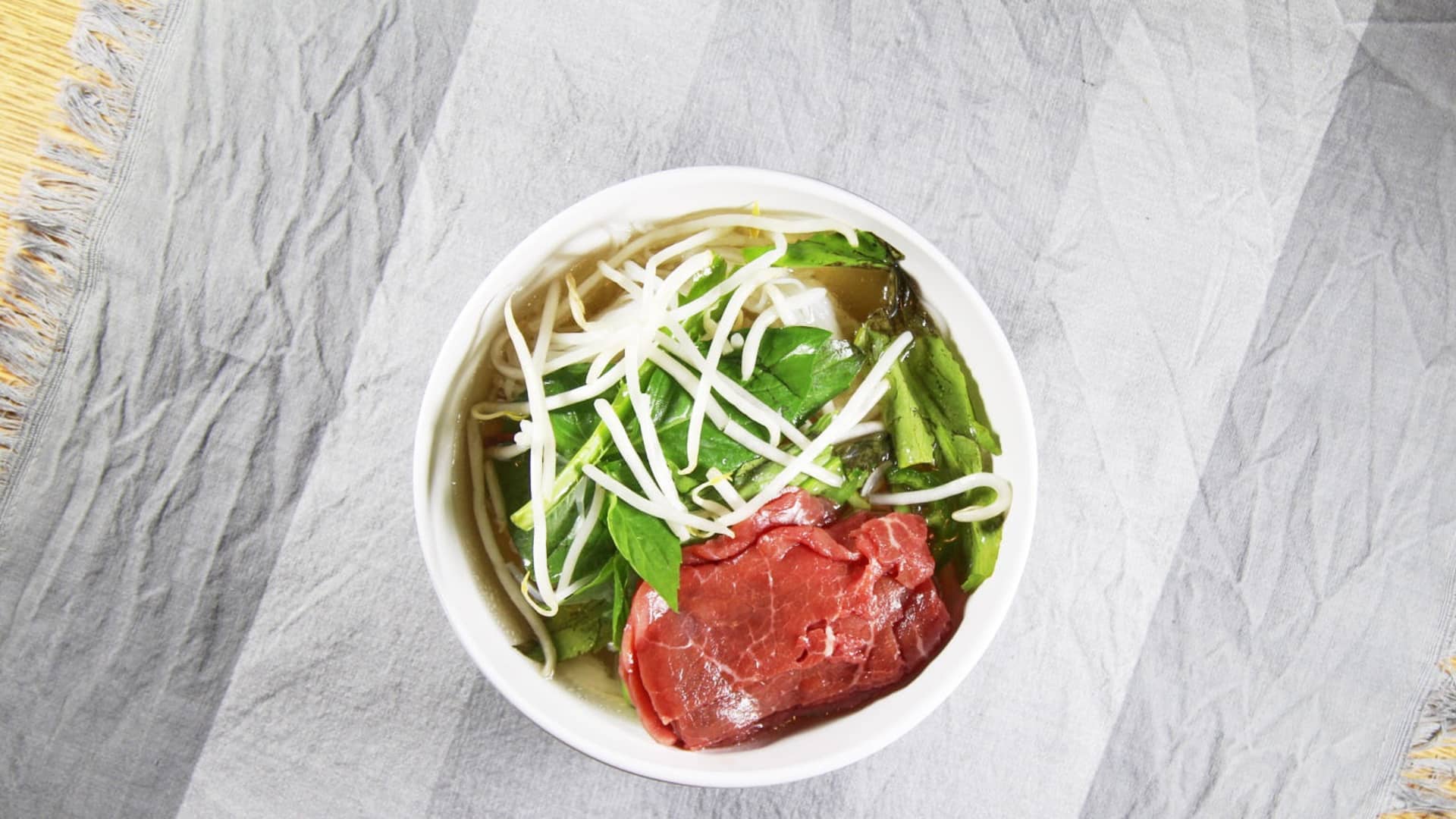 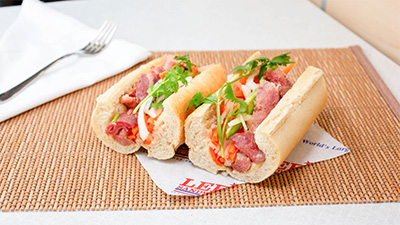 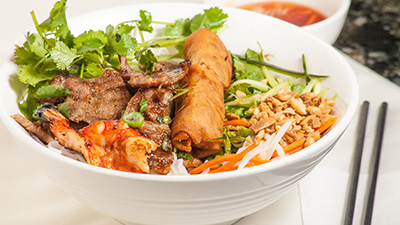 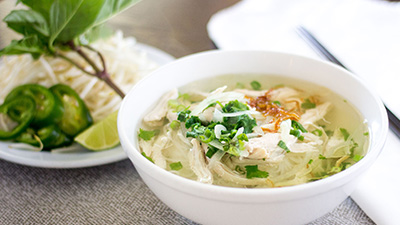 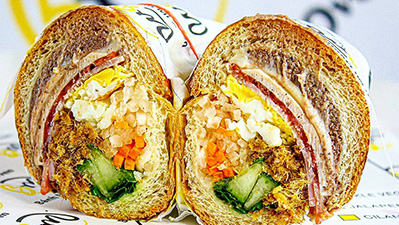 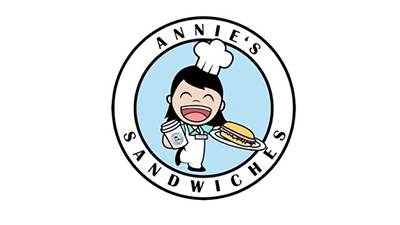 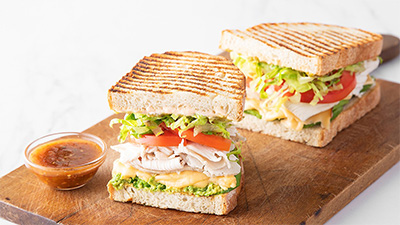 4.8
•
2000 ratings
Order delivery
Banh Mi
Sandwich
Vietnamese
Share your thoughts on this story or the site by emailing us at stories@doordash.com. 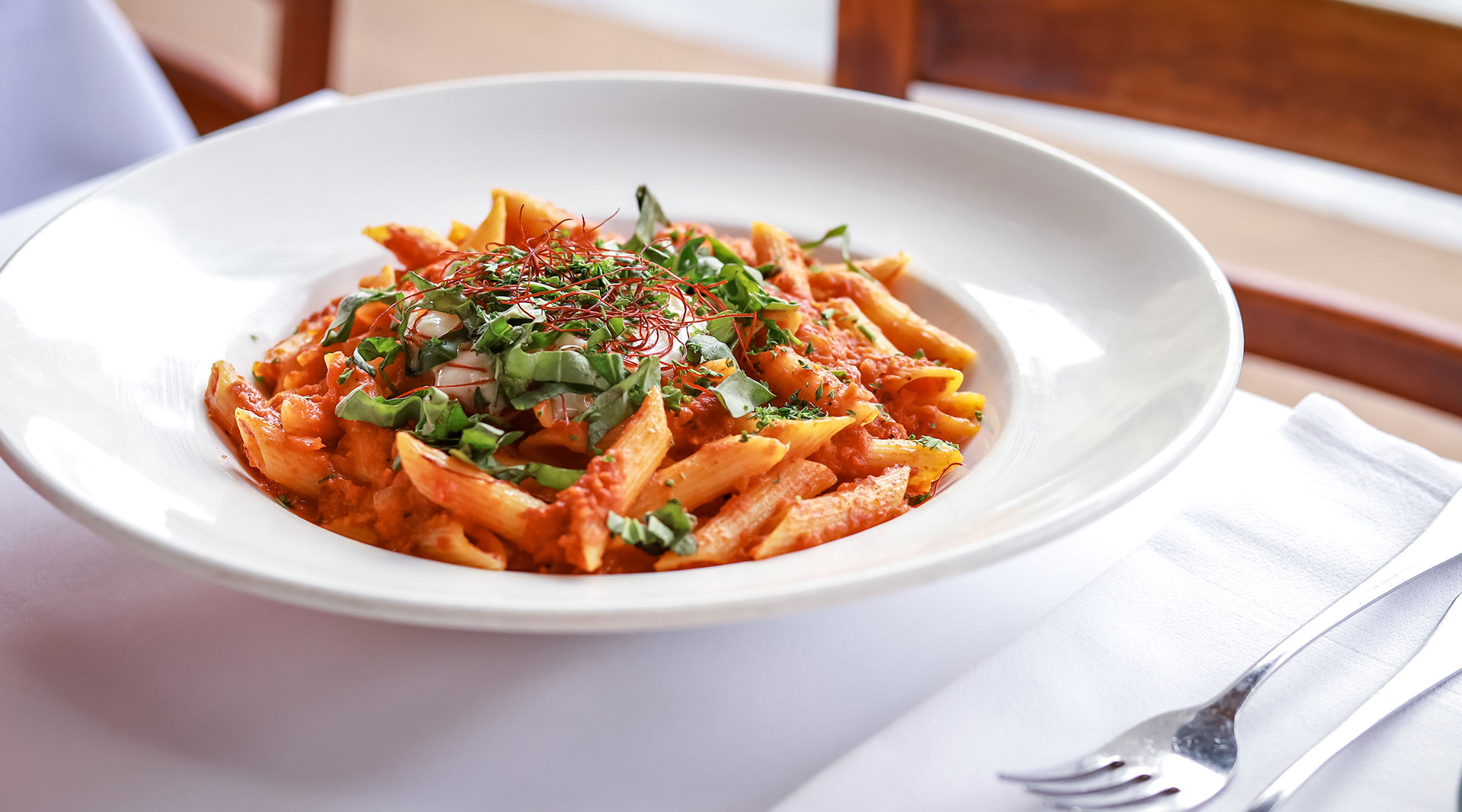