Bucking the V*nill@ and Chocolate Hegemony With Extraordinary Flavors 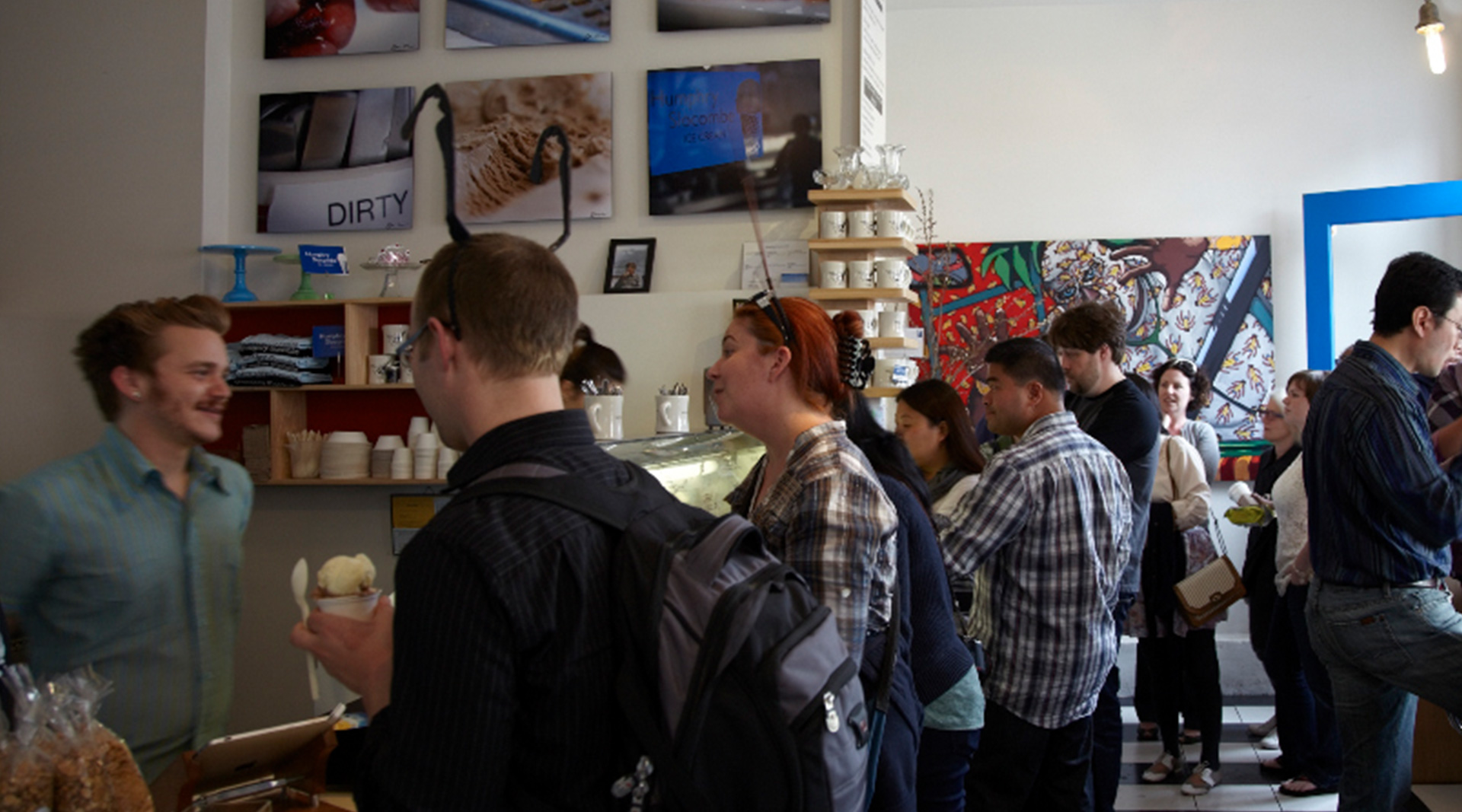 Customers line up at the counter (photo provided Humphry Slocombe)

When Jake Godby and Sean Vahey hung a double-headed cow on the wall and opened the doors to their first location of Humphry Slocombe Ice Cream on a relatively quiet corner in San Francisco’s Mission District back in December 2008, friends and colleagues in the hospitality industry didn’t know what to think.

Godby, who had worked as a pastry chef for more than 15 years for highly rated fine dining restaurants in San Francisco such as Boulevard, Coi and the now defunct Fifth Floor, asked his friend and former co-worker Vahey, who had a restaurant management background, to take a leap of faith and open up the shop with him. Vahey wanted to name the shop Danger Jake at first, but Godby instead advanced the whimsical, question-evoking name of Humphry Slocombe, which comes from Mr. Humphries and Mrs. Slocombe, two colorful characters from a 1972-1985 British comedy that aired in the United States on PBS called Are You Being Served?

Ice cream always has hit potential, no matter where it is, but Humphry Slocombe challenged the vanilla and chocolate status quo and initially made for a tougher sale in the Mission with their roster of truly out-of-the-ordinary flavors. Opening week options in 2008 included enduring mainstays like the now incessantly-copied Secret Breakfast (bourbon-spiked ice cream with caramelized cornflake cookies) and Blue Bottle Vietnamese Coffee. Only later did the company introduce Tahitian Vanilla, but it’s spelled Tahitian V*n!ll@, as if it is a bad word that shouldn’t be written out. Now, the company has cultivated a flavor list that has included such eccentricities as Elvis (The Fat Years), Carrot Mango Sorbet, Cheese, Salt + Pepper and Strawberry Black Olive along with perpetual crowd pleasers like Malted Milk Chocolate, Honey Graham, Matchadoodle and Peanut Butter Fudge Ripple.
‍

Once Humphry Slocombe actually opened up the Mission scoop shop for that first time, just over 11 years ago, Godby and Vahey employed a clever marketing tactic to attract attention and recruit customers: they’d take turns being really extra by standing on the corner of 24th and Harrison Streets and eating ice cream.

“This is not an exaggeration: I would stand outside and go, ‘Mmmmm, oh my God, this ice cream is so good!’” Vahey confessed, with a smile. “I’d just be audibly trying to get people, and people would be like, ‘Where did you get that?’ I’d be like, ‘Oh, there’s this place over here called Humphry Slocombe.’ It was so obnoxious! I was just like, ‘Wow I can’t believe how delicious this ice cream is!”

Good ice cream doesn’t exactly stay a secret for long in any neighborhood. Godby and Vahey made friends with other establishments and merchants in the neighborhood right away and they all started trading their wares.

“This was that first year that was so instrumental that we love telling people about,” Vahey said fondly. “We both took turns crying and I was eating hot dogs out of a coffee pot in the back with no money and we were taking cookies and ice cream to the bar Dirty Thieves, which is now Blind Cat. They took such pity on us and they’d give us free beer and we’d give them ice cream.” Humphry Slocombe has since collaborated with many area favorites, including Almanac Beer and Flour + Water, as well as restaurants all over the city.

Winning over the neighborhood residents in the Mission was a little bit trickier, especially once word of the awesomeness of Humphry Slocombe’s ice cream started traveling fast in the blogs and by word of mouth and people started flocking to the shop from all parts of the Bay Area and beyond.

“After that year, when we first started gaining a lot of steam really fast and started getting long long lines, our block hated us,” Vahey said. “People would come in once a day and be like, ‘You have to control that line, I can’t go to sleep, pick up your trash.’ People were really pissed. We were like, ‘Thank you, we are so sorry, these are growing pains.’ We started realizing that we were affecting the neighborhood whether it was negatively or not, but then we found that people on 24th, the other businesses owners, were happy that we were doing well.

“I assumed it was because people were coming into the neighborhood, but everybody was so supportive of us and we never experienced anything from any other business but,‘You go girl!’ Everybody was super, super supportive,” he continued. “And it was only the neighbors, because people were out late eating ice cream and making noise and double parking. I’ve never heard a single thing from any other business that wasn’t positive and supportive. People were so cool to us.”

Once they got the crowd under control, it was time to grow — and the business published a cookbook and became a national media darling. Now, in addition to the Mission shop, Humphry Slocombe has scoop shops in San Francisco’s Ferry Building, Oakland and Berkeley, with many flavors available for nationwide shipping.
‍

Godby handed Vahey a bowl of Secret Breakfast, which is an ingenious combination of bourbon-spiked ice cream with cornflake cookies, on the day that he asked him to start a business with him.

“I loved it so much, I liquidated my 401K and jumped in,” Vahey shared. “Now, Secret Breakfast is always our bestseller.”

Chicken & Rice Around the Globe in San Francisco
By
Susannah Chen
Chicken and rice is such a crowd-pleasing combination that just about every country has its own rendition. Here are some favorites.

Souper Bowl Winners in San Francisco
By
James Lee
Every New Year is a perfect opportunity to leave behind the over-indulgent dinners, happy hours, and way too many “cheat days.” But let’s be real - eating healthy can be tough and menu planning can be even tougher. It takes some serious mental fortitude! Enter: soups!